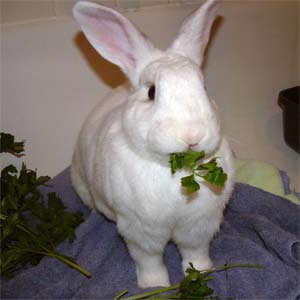 In June of 2009 Jack had surgery to get a large bladder stone removed.  The stone was tested – turned out to be a Calcium Oxalate Stone. Reoccurrences of this stone can happen. There is a medicine that may help with the prevention of reoccurrences of Calcium Oxalates Stones called Potassium Citrate; However, so far with vet prescribed diet changes, his follow-up urinalyses and exams show no signs of problems as of yet.   We will continue to test a few times a year.

How we discovered Jack had a stone: Unlike many rabbits who may have stones, Jack never showed discomfort nor did he strain to urinate,  and his perfect habits remained the same.  However, he was getting very humpy with Vivian – more so than normal.   And who knows, this could have been his way of showing discomfort.   Soon after his increased activity, I noticed dark red urine that didn’t look like the “normal red” urine that bunnies can sometimes get.    It looked like blood, so I soaked it up with a paper towel, and took him to see the vet.  Sure enough it was blood.  Via a physical examination, a stone was suspected, and x-rays confirmed it. The explanation for the blood was that the stone was rubbing up against the bladder wall when Jack was running around like a crazy bunny and mounting. This caused scraping and little tears in the lining which then caused blood in the urine.

Why did Jack get a bladder stone?  Many people are under the impression that stones are caused by too much calcium in the diet. Not too long ago, I thought the same thing!  But most rabbits successfully excrete excess calcium, while others have a much harder time.  So why do some rabbits, like Jack,  have a harder time processing calcium? The answer is really more complicated that what I can answer here, but after speaking with my rabbit-savvy vet and doing a little research,  and googling “bladder stone in rabbits”,  the simplified answer is “genetics” and/or a type of illness, like Metabolic Bone Disease.   I am also  continuing to learn as I continue to research.  Here’s a helpful article if you want to more read more about it: Bladder Stones and Bladder Sludge in Rabbits

Note: JACK’s diet is for reference ONLY so you can consult with your vet and come up with the right plan for YOUR bunny.  There is more than one type of bladder stone.  Calcium Oxalates Stones are just one type.

The most important part of his diet is  plenty of hydration!   His diet’s main purpose is to supply plenty of nutrition in the most hydrated way.

Hay:  Nothing changes with this.  Timothy, Orchard, Blue and Oat.

No Pellets: (gradually decreased).  It’s not that my pellets were bad, (I had a very good timothy based brand that was highly recommended by vets), it’s just that it doesn’t help facilitate the hydration rule.  Pellets are dry condensed

Large Variety of Greens and Veggies: Since pellets are not part of the diet anymore I have to not only add more greens but more variety to supplement.  Serve greens wet –

Water:  To encourage more water intake, along with his regular bowl of water, he gets a second bowl that has a 10% apple juice mix.  We were instructed  to start out with a a 50/50 juice water mix if Jack  wouldn’t drink the lower percentage mix, and then slowly decrease to 10%.  I found that Jack will drink the whole bowl (more than two cupfuls) of that if I let him, but the vet said I don’t have to keep refilling the flavored bowl.   Just once  day is fine. Again, THIS is NOT recommended for bunnies who don’t have calcium issues, as of course Apple Juice is higher in sugar, even the most natural organic kind you can get.   This worked very well while he continued to drink so much of it.  NOTE: (He later developed an unrelated cancer that affected his appetite as you will read below — we didn’t know at the time why though he stopped drinking it when we wrote it, but it is still great info for those bunnies that are not able to hydrate through diet)

Jack went back to old ways of not drinking much water – not even the flavored water. I started to notice his urine getting more white after that,  so the vet recommended a salt lick or salt substitute to sprinkle on his greens to encourage more water intake.  He was not interested in the salt-lick and didn’t care for the lightly “salted” greens.   So that didn’t work for Jack.

He used to drink two cups of flavored water a day in addition to his wet greens and his urine looked nice and clear. But these last few months he’d consume a half a cup of water at the very most per day.   His urine started to become thicker and sludgy.  He would sit in a strange position sometimes (like he wasn’t comfortable), and he urinated outside of the box much more, his appetite decreased a bit, and he just wasn’t quite himself — so off to the vet we went.  He had a urinalysis which showed higher calcium.  His bladder was expressed and little bit of sludge came out. He had xrays as well.  No stones which is great, but sludge is still a problem that needs to be managed. (Note: Something I learned at the vets about sludge and xrays:  Sludge can be seen on xrays – looks whitish, but  normal rabbit urine in the bladder can many times show up the same way on an xray – so xrays alone may not be able to diagnose sludge – it’s more of a tool used in conjunction with other symptoms to help confirm a diagnosis)

He is now on Subcutaneous fluid once day for 2 weeks to help flush his system out.  He’s very good during it as he gets lots of bunny rubs and tons of affection during it, and it only takes about five minutes.

We have a follow-up appointment with the vet next week to discuss a long-term management plan.  I’ll keep you updated.   For now though, he’s doing very well and his urine looks better already.

6/11/10:   Jack’s urine, though higher in calcium, was at a much better level.   We are now doing Sub-q fluids twice a week on average.  (or more if we notice the thicker white excretions)

May 2011: Jack passed away from cancer – unrelated to his calcium issue.