How to Make your Bunny Bonding Experience Easier

Bonding bunnies can be tricky at times. How would you like a stranger to come into your house, eat your food and lounge on your couch? Many bunnies don’t like this either and things can get aggressive fast. Though there are numerous experiences of easy bonding, it is best to expect that there are going to be challenges. To leave it to chance can cause serious injuries when bunnies fight so it’s best to go through a bonding process when introducing bunnies.

There are some basics to bonding, but each bonding experience is unique. You have to figure out through trial and error what works. For example, one pair of rabbits may like eating together, while another pair may fight over food. Same thing can happen with the litter box.

Remember, there is no set time line: Though the average is a few weeks, bonding can be as short as a few days to a few months or longer, or in rare cases – never.

Patience and staying calm may become the biggest challenges. We can hinder or help the process with our own reactions. So take a deep breath and repeat after me, “It’s only bunny bonding, the world isn’t ending, and yes I have other things to do, but maybe I can learn something from this.” I know I learned patience. 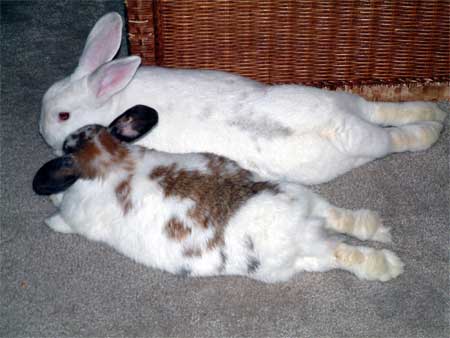 The hormones that drive them to fight over territory are lessened when bunnies are spayed/neutered. During bonding, bunnies may mark more and seem to lose litter box habits. And urine and territorial droppings of bunnies that are not spayed and neutered are pungent.

It’s best to wait a month after surgery before bonding to let their hormones die down. It’s important to note that a neutered male can still impregnate an unaltered female within a month after his neuter surgery. He can still have viable sperm during that time.

Note: Most bunnies at rabbit rescues are spayed and neutered. Plus rescue groups can help you with bonding, which brings me to the next subject.

The easiest bonding session I ever experienced was when I took my bunny to the House Rabbit Society and let him pick HIS favorite.

There was one gorgeous rabbit there that I loved, and I hoped he’d feel the same way, but she hated him, and wanted him dead. So that didn’t work, but can you imagine if I picked her out and brought her home to him? Egads!

The HRS expert observed his behavior toward the other “dates”, and from that, she was able to choose rabbits she thought matched better with his personality type. This is extremely helpful for those who don’t yet know how to read their bunny’s body language.

I still had to go through a bonding process, but it took only a few days.

Put pens/cages next to each other

Some bonding experts recommend placing their cages or pens near each other and switching the bunnies or their litter boxes everyday for two weeks prior to bonding them. Though this can really help things progress, I have found a couple of things to be cautious of:

Be sure to wear gloves to protect your hands if they get aggressive, and have a squirt bottle handy to stop aggressive lunges.

I always start in a neutral territory, which is any place that my bunny doesn’t’t usually go into, like the bathroom, bathtub or laundry room. I start with 15 minute sessions in the neutral space a couple of times a day, and I increase or decrease the time depending on how they’re getting along.

Rabbits can hold grudges, so I always try and end on a positive note. Positive doesn’t mean they have to be snuggling. They can just be ignoring each other. 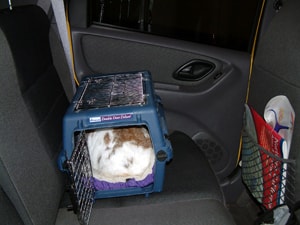 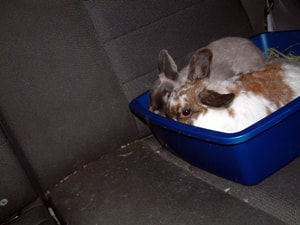 Rough Starts? Try car rides first
So what do you do if there really aren’t any positive experiences to end on? Some bunnies want to kill each other even in neutral territories. If that happens, I put them in the carrier together and take them on a 20 minute car ride first. I’ve even had rabbits fight in the car, so be sure to have someone with you the first few times.

Moving on From Neutral Territory

Once I am able to trust them alone during their bonding sessions in the neutral space, then I move them to a semi-neutral place. (again, this can take days or even weeks of daily sessions)

So how do yo know when you can trust them alone? (When I say alone, I mean just to do other things around the house – still within ear shot). I feel I can do that when they can move away from or towards each other without a problem. When they seem to be comfortable around each other, lying together, and/or at least one grooming the other. When I see this happening for several sessions, then I move on to the next step. 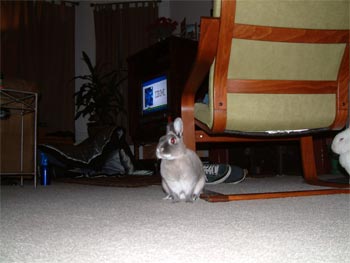 A semi-neutral place is usually a general area that everyone, humans and animals alike, spend time in. The bunnies still need to be kept confined during bonding, so I put them in an x-pen in that area.

I go through the same routine in the semi-neutral space as I did in the neutral territory. Sometimes the move doesn’t’t affect them, and other times the move can cause a little bit of a dominance dance. That’s normal, but if things drastically digress, then I go back again to the neutral territory for awhile or rethink my strategy. You’ll see in the bonding journals, that all different types of methods were used in Rucy & Bailey’s long bonding saga. 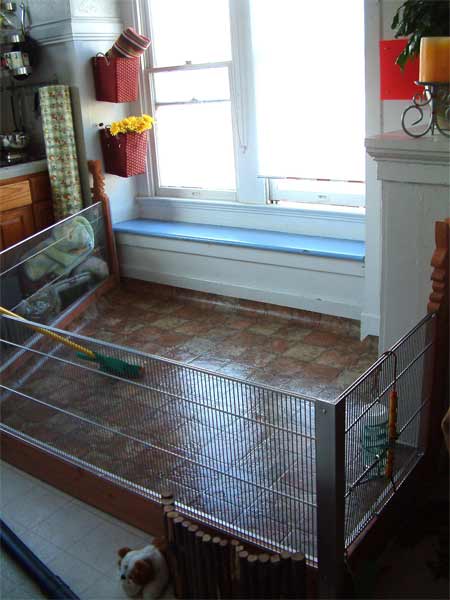 Once I can trust them to be alone again without direct supervision in the semi-neutral space then I put them together in what will be their permanent space. My rabbits have a large area sectioned off in the kitchen that they stay in when they’re not running around the house. But before I bring them to “their” new space, it’s best to rearrange it, clean it with a vinegar and water mixture, and put in fresh linens and rugs. This can help make it new even for the original bunny which should help with any residual territorial holds he may have over it. 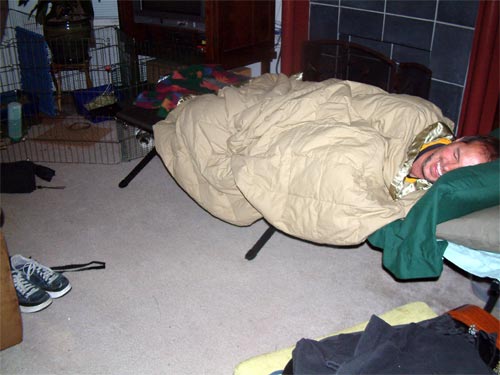 I supervise in their space just like I did in the previous spaces. Once they are getting along there, then I consider them bonded.

But for the first night, I always want to be within ear shot of their space so I can wake up if a nasty fight breaks out.

Since our bedroom is too far away, I brought a cot out to sleep on.

(My husband decided to take it hostage) 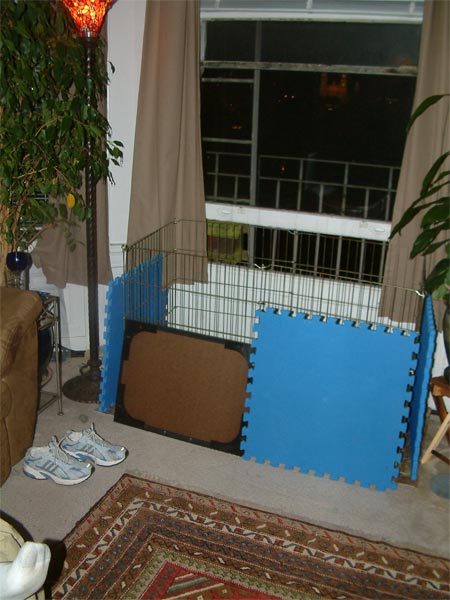 Don’t have a semi permanent space? Create one

One of my bunnies considered almost every place, (except for the bathroom), her area, so I had to create a semi-neutral space. I did this by putting a section of sheet vinyl on the floor. (You can use a tarp or a blanket too). Then I set-up the x-pen over the vinyl. I then covered the sides of the x-pen with blankets, and cardboard to block their view. Some general room smells might be familiar but they don’t usually recognize the space. Then over time I gradually removed the side panels. 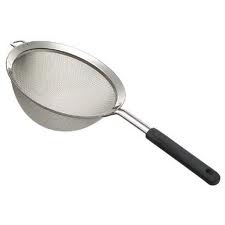 Rabbits can really do damage to each other, and first few meetings make me nervous. I learned a great protection technique while observing bonding at a local rabbit rescue (www.saveabunny.com.) A net type pasta strainer doubled as a rabbit protector. Placed between two rabbits during their initial introduction, it allowed a safe way to see their reaction towards each other. The strainer can also be used throughout bonding. If one lunges at another, the strainer can quickly be placed in-between them. 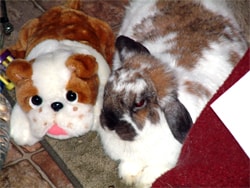 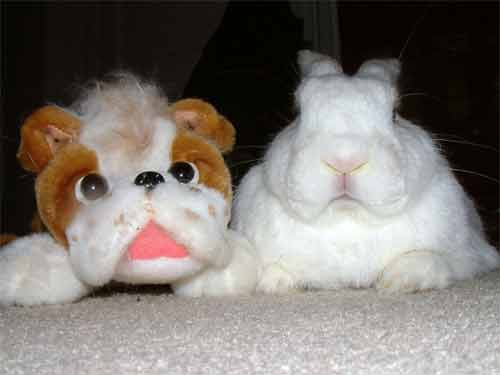 I accidentally discovered a helpful pre-bonding technique; I call it the “Stunt Double”:

A Stunt Double is a stuffed animal that is covered in the scent of the”other” rabbit. I do that by putting the stuffed animal in the “other” bunny’s cage for a few days. I also collect fur from the bunny brush. Then I cut little openings in the Stunt Double’s forehead, and put the rabbit fur there.

The stunt double has helped me predict a bunny’s reaction. It also helped my bunnies safely get used to their potential companion. I can’t guarantee that this will work in every situation. This isn’t a scientific study or proven method; I accidentally discovered the stunt double technique when I was trying to help a lonely foster bunny, Jack, feel better.

One member said this worked very well for a very “humpy” dominant bunny. (neutered!) Anyway, he would wear out and anger his real potential mate with needing to mount all the time. The stunt double provided a way for her bunny to wear himself out prior to the bonding sessions. She said this helped keep him a bit more calm during the bonding session and bonding ended up being a success. Poor stunt double though was left behind – didn’t even get dinner and movie first.

Jack’s Experience with the Stunt Double:

I gave the stunt double to Jack, my foster bunny at the time who had lost his mate a while back. At first he charged and growled at the Stunt Double, who smelled like my bunny Rucy. But because the stunt double didn’t return any aggression, I guess he felt safe, and after a few days, he began cuddling with it.

Later when I adopted Jack and actually introduced him to Rucy, all he wanted to do was cuddle. Rucy was not aggressive with Jack at all. But she wasn’t quite sure what to make of Jack’s affection, but within a week she was in love with this new affectionate rabbit.

I decided to try this with Bailey and Jack. I made two stunt doubles – one for each bunny. They both reacted aggressively to their stunt double. They showed the same behavior during their first introduction, but at least I was prepared with my strainer, gloves and water bottle. I continued to use the stunt double during the times they were away from each other. Over time, Jack and Bailey began to cuddle with their doubles. Their behavior with the doubles seemed to mirror their behavior with each other. I don’t know if it made bonding any quicker between them, but it at least helped me prevent injuries because I was prepared for aggression.

Since bonding is never the same, Check out more links regarding bonding.

ARE YOU IN THE MIDDLE OF BONDING?

Let’s learn from each other. Send your bonding journal, and I’ll post it or post tips gained from it.

Please read Photo Tips on taking pictures of your bunnies.